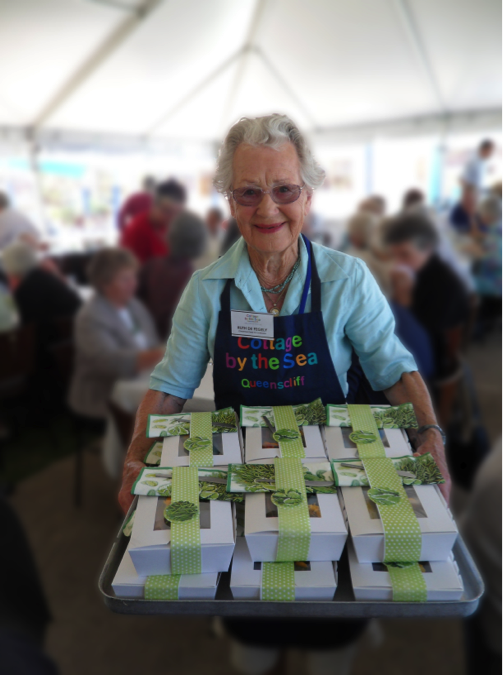 Ruth was born in Beaufort to Arthur and Elsie Beggs and was the eldest of 3 children, with siblings Robert and Rosie. Her early years were spent on a property called \’Niawanda\‘ and then the family moved to an old Beggs property called \’Buln Gherin\‘. Ruth was home schooled until the age of 13 and then she went to boarding school at the Hermitage Church of England Girls Grammar School in Geelong.

At the end of \‘48, it was back to the farm to help prepare cattle for the various shows and in that time Ruth was reacquainted with a family friend, Richard (Dick) de Fégely. They married in \’53 and ran a farm south east of Ararat called \’Quamby\‘. They raised and educated 3 boys, Charlie (who runs Quamby), Rob and Phil.

In 1985, Dick won pre-selection for the upper house seat of Ballarat Provence with Ruth by his side. She did every conceivable job for the party; doorknocking, fundraising, handing out \’how to vote\‘ cards, policy assembly, pre-selection panel, admin council, women\‘s section, women\‘s council Chair and country vice president \’ just to name some!

In 2015, Ruth received a 50-year service award for Red Cross. Raising 3 boys on a farm required knowledge of first aid but she took it to a higher level. She delivered \’meals on wheels\‘, taught first aid to schoolchildren and regularly worked at the blood bank taking blood from local residents. Trips to the local prison for blood collection was also a regular occurrence. Whenever there was a fire in the Ararat district, Ruth was on hand to provide first aid and sustenance to the hungry fire-fighters.

Catering was another feat that Ruth took on, supplying catering services throughout the Western District. Many a brides\‘ day was further enhanced with her culinary expertise.

Ruth was made a life governor of the Ararat Hospital. She was a founding member of McGregor House in Ararat, which provided activities and employment for clients with a disability. She was also a founding and Life Member of the Ararat Ark Toy Library for children with special needs.

In her early days at \’Buln Gherin\‘, her mother always had help in the house from young girls from the Ballarat orphanage. That organisation is now known as CAFS, Children and Family Services for Ballarat and district, which Ruth was a board member for many years.

In 2007 Dick and Ruth moved to Point Lonsdale and her community work continued with the Red Cross and delivering \’meals on wheels\‘ until mid 2015.

Cottage by the Sea, Queenscliff was another organisation that benefited from Ruth\‘s involvement. She raised over $100,000 in the past seven years by selling Christmas cards donated by John and Bindi Simson of Simson Cards.

In 2000, both Ruth and Dick received Centenary medals for their services to the community and in 2007 Ruth received an OAM for service to political life in Victoria through the Liberal Party of Australia, and to the community of Ararat.

Ruth\‘s mother Elsie Beggs (nee Shaw) was a direct descendant of Mary Reibey. Mary\‘s portrait graces the A$20.00 note. Ruth loved Mary\‘s \’rags to riches\‘ story and I feel sure some of her boldness came from her Great, Great, Great, Great Grandmother.

Whatever Ruth put her mind to she was formidable (some even say they were a bit scared of her!). She threw herself into the cause, no matter how large the challenge with bold enthusiasm, good grace and with a wonderful sense of humour.

The eulogy at her memorial service held at \’Oyl\‘, (her Goddaughter, Sarah Roe\‘s venue in Mannerim) was delivered by her 3 sons who each spoke about aspects of her life. Below are the last two stanzas of my piece that was done to verse. A great reader, poetry was something Mum enjoyed and encouraged.

We\‘ve heard about manners and being a good host

but there was one thing that mattered most.

Instilled by generations past to be

The importance of having strong family.

So now for reflection, the time has come,

A wonderful person, a fantastic mum.

To friends and family that do adore,

The legacy you made, lives forever more\’¦..

Family was important to her, not only did her immediate family benefit from her generosity and spirit but so did her; 6 godchildren, 11 nephews and nieces and their offspring and the long list of relatives.

Ruth is survived by her 3 boys, their wives Liz, Sarah and Jane, 10 grand children, two great grand children and her brother Robert.