An auction at a fund raising dinner can be just an auction or it can also be part of the entertainment! You succeed in making it both an auction that brings in the money and entertaining at the same time, both for those who were bidding so spiritedly and also for the rest of the audience.

Phil, you must take a great deal of the credit for all the compliments we have received. The auction made more than reserve on every item and I have heard nothing but praise for you ‘expertise’. Everyone at the function has said that the Gala was the ‘best yet’ and are already looking forward to next year.

Last Friday, 27 May 2016, the Ararat Branch for the Victoria Policy Blue RibbonFoundation\‘s held its 15th Gala \’Night of Nights\’ at the Ararat Town Hall. It was great to be back in Ararat where I have conducted the Auction since 2002. 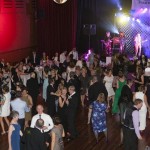 The night raised over $30,000 for the Jason Bond Perioperative Unit at East Grampians Health Service. With the locals eager to contribute to a fantastic cause.