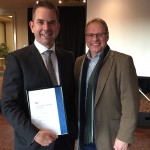 Tom Roberts from Nelson Alexander was today awarded the 2016 REIV Senior Auctioneer champion.Tom won from a field of 5 with previous Australasian finalist Harry Li as the runner-up.Their thoughts are now turned toward the Australasian competition which will be held in Melbourne in September.Congratulations to both Tom and Harry.