In particular, the Auction was a resounding success and all the monies raised on the night (in excess of $100,000) will be directly used for the Microsurgery Foundation’s research.

…and the winner is Harry!!Harry Li from Victoria has taken out the 2016 Australasian Auctioneer Competition.A previous finalist and now third time lucky for Harry.A huge effort.Congratulations!! 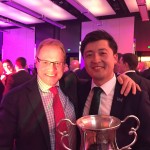