My auctions today are far removed from those before I sought Phil’s help and my company and I win business as a result of those changes. That’s the benefit of being coached by the Supercoach! 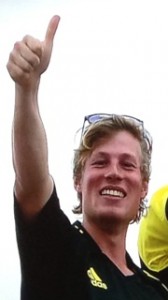 Jim de Fégely at Trent Bridge, Day 1, sporting the green and gold. A great thrill to see Ashton Agar (he and brother Tom played junior footy with Ashton at the EB Vampires) make his debut.