“Your skill as our auctioneer for the evening was an important part of the success of this year’s Heart Classic.”

ALL THAT GLITTERS IS GOLD

Jon Steffanson was brilliant and his interview with Usain Bolt was captivating.  John’s work to drive the Nitro games has also been extraordinary. 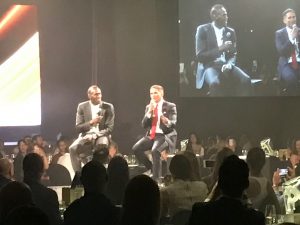 Usain has a wonderful confident nature without arrogance and he had so much time for so many of the 600 crowd to avail themselves of a selfie.

Bolt was happy to talk and happy to keep giving more and more. He told Jon that he likes interviews because “I am quick on his feet.” He sure is!

We auctioned three items, the highlight being one of his signed gold running spikes that he wore in Rio which made $1,200.  We somehow found the left foot and sold that to the under bidder.

The other two items were a signed Methuselah of Mumm Champaign and an inner sanctum experience for someone attending the Nitro Games and being the assistant team manager for the night.

We were also able to sell that inner sanctum experience for another night to the under bidders as well.

Just short of $40,000 was raised to support Athletics in Australia and all credit to Petina and Sam who pulled the event together in a short lead time.

A lovely relaxed event and Usain, the star attraction definitely didn’t disappoint us.